Would an increase in wages decrease corporate profits or increase prices? This is one of the central questions behind Michal Kalecki’s article Political Aspects of Full Employment published in 1943. Ultimately, Kalecki theorized the effects of Keynesian stagflation in the 1970’s and the rise of neoliberal “TINA” economic policy, foretelling the demise of the Bretton Woods global economy from a debtor to creditor paradise (Blyth, 2016).

Living in a time (2017) of increasing global political-economic uncertainty, in a world facing the rise of populist politics, precarious labour conditions, deregulated global financial markets, increasing intrastate inequality…etc, it is becoming increasingly paramount for the global citizen to ask “How did the state of the world end up in the present condition?”. In answering such a question, it is necessary not to ignore the role of inadequate common sense economic policy played in developing illusionary narratives of how “should” the macro-economy function. Through analysis of Michael Kalecki’s Political Aspects of Full Employment it is apparent that the majority of macroeconomic policy is prescribed through a ‘normative’ (what should be) common sense moral narrative, lacking any substantial insight into the political motives behind economic policy. By critically examining the moral assumptions behind economic thought, it is apparent that a common-sense approach to macro-economics is inadequate in finding solutions to present political turmoil.

Deviating from Keynesian economics Kalecki points out the inherent political problems that arise from sustaining levels of full employment. Kalecki notes that sustaining full employment will increase market demand (as everyone will be buying and spending more with their incomes), and the prices of all goods and services in a market economy will rise. The rise in prices because of an increase in income, will effectively lead to a period of inflation. For the average worker, the macroeconomic effect of full employment is wonderful, as there is a greater availability of work, greater bargaining power, less financial liabilities (as inflation will act as a natural devaluation on loans, mortgages…etc), and an overall increase in economic welfare in the short-run (Kalecki, 1943). For the corporate businessmen, a scenario of macroeconomic full employment is a nightmare as inflation over time will slowly eat away at corporate investments, despite full employment causing no decrease in corporate profits (Kalecki, 1943).

Despite the economics behind the nature of stagflation, it is clear that a Bretton Woods system of minimal risk sustaining full employment inherently causes political class conflict. In the wake of the 1975 OPEC crisis and the dismantling of the Bretton Woods economic system, the wrath of anti-inflationary policy was paramount to advancing the neoliberal agenda, as the only inevitable alternative. Reagan and Thatcher in the 1980’s solidified anti-inflationary policy by stagnating wage growth under increases in productivity, resulting in wealth accumulation towards the top 1% of the income distribution. Contractionary anti-inflationary fiscal policy was also aided by expansionary monetary policy, effectively regulating the money supply in maintaining low to negative interest rates. This new ‘neoliberal’ agenda drastically differed from the regulated Keynesian economic model, because of the political-class leverage at stake. Thus, Kalecki’s 1943 Political Aspects of Full Employment effectively foretold the rise of contractionary fiscal consolidation (austerity), in which an alliance of big business would “…induce the government to return to the orthodox policy of cutting down the budget deficit.” (Kalekci, 1943).

Kalecki’s theory on full employment, resulting in the subsequent rise of anti-inflationary neoliberal policies can be seen in the real changes of global income between 1988 to 2008. Economist Branko Milanovic published in a 2012 World Bank working paper, the now-famous elephant graph of the global income distribution (Figure 1.). This graph clearly highlights which part of the global income distribution are the “winners” and “losers” of economic globalization. The vertical axis measures changes in real income (measured in a 2005 baseline prices), the horizontal axis is the percentiles of the world population in income. It is apparent that the top 1% real income increased more than 60% over the past two decades, as well as the 50th to 60th percentiles had an 80% increase in real income (Milanovic, 2012). These “winners” demographically consist of the 60 million richest people, and the middle-class population of the emerging market economics (i.e. China, India, Brazil, South East Asia Nation-States…etc.). The apparent “losers” from policies of economic globalization or “neoliberalism” appear to be the lowest 5% of the income distribution with their incomes remaining relatively stagnated (Milanovic, 2012). Most interesting about the elephant graph is the portion of the income distribution between the 75th and 90th percentile, that have seen the greatest stagnation in income growth. Demographically, the 75th to 90th percentile downward portion of the elephant graph is the American middle class. This downward portion is exactly what Kalecki predicated the political effects of full employment on, and is the reason why Donald Trump is now the president of the United States. The stagnation of upper middle class incomes was a lost battle in favour of international capital investment, playing into the greater narrative of global financialization since 1975.

Figure 1. Change in real income between 1988 and 2008 at various percentiles of global income distribution (calculated in 2005 international dollars) 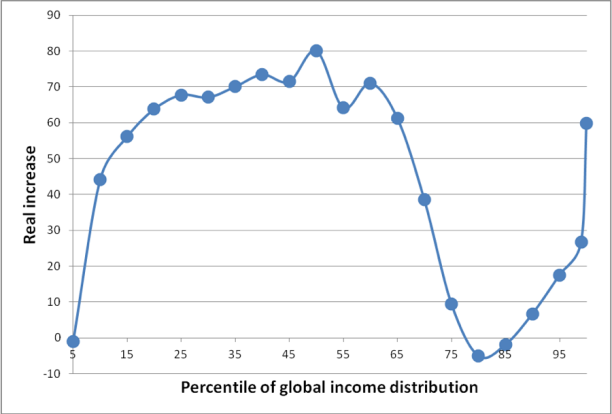 BEYOND THE KALECKIAN APPROACH TO FULL EMPLOYMENT

Thinking beyond the inherent problems of stagflation, income inequality, and political populism is critical not only to advance individual’s political rights and freedoms, but also to protect humanity from existential global crises. Although, a review of Michal Kalecki’s 1943 Political Aspects of Full Employment might seem outdated in its application to the political-economy of the 21st century, the central idea of class conflict premised on political interests in Kalecki’s work is more prominent in 2017 than ever before. The fight over wage stagnation diverging from increasing economic productivity in upper middle class nation-states imposes a political challenge to center-liberal policy makers. Essentially, center-liberal governments are self-imposing a political deadlock between the special interests of capital and labour classes, while serving neither their political aspirations. In response to the center-liberal/liberal internationalist approach, upper middle class citizens around the world are increasingly growing politically disengaged, using their vote for fringe politics as backlash against the last thirty years of the neoliberal agenda.